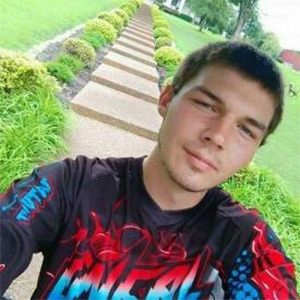 TRAVIS CHRISTIAN “The Green Arrow” BUTCHER, 19 years of Belcamp, MD, was called home to be with Jesus on November 26, 2016. Born on October 1, 1997 in Baltimore, MD, he was a son of Harold E. Butcher, Jr. and Kimberly Anna Hamilton Butcher.

Travis was a determined, heroic, loving young man. He was passionate about spending time with family and friends, drawing, caring for animals, restoring his car, motocross and his Suzuki Motorcycle. Travis was the MacGyver of the family; his nieces and nephews brought so much joy and laughter into his life. He would soothe and put them to sleep, sometimes called a “baby whisperer.” He protected his family and close friends, especially his mother, Kimberly and sister, Stephanie. Now he is our guardian angel; a free spirit who didn’t fear the world. He created the quote “Stand Tall For What You Believe In.” He put this into practice every single day… even in death his legacy lives. My brother was a donor and I know that would make him happy because all he ever did was help people.